The task system is one of the core systems that allows progression in BlackTalon. Having multiple monsters to choose from, within different level ranges not only provides you with experience but also some other items that can make your progression feel smoother.

From mainland city's temple, head south and enter the Creatures/Quests teleport just, as indicated in the image to the right. Once inside, go up both stairs and you will immediately find the first tasker NPC: Snip Task Master. Talking to him will open a little menu. Simply choose the Task option to get started.

When choosing the tasks you want to do, there will be three options for you to choose from: Easy, Medium and Hard. Each difficulty represents the amount of kills you will have to perform for said task, with harder difficulties giving more experience and items in return if compared to easier difficulties.

As shown in the image on the right, the difficulties are on the left, under the monster name and picture and the rewards for each difficulty is displayed to the right of that.

After accepting a task on whichever difficulty that you chose, you can now head to the spawn and start killing monsters. Do not be afraid to party up, since you can share a task progression with three other people, as long as everyone deals at least 10% of the creatures HP as damage. After finishing, just return to the same NPC you got the task and turn it in. And also elite monsters will provide extra kills towards the progression.

Be aware, after completing a task you will not be able to do it again for a period of time. This cooldown timer is different for each difficulty selected, which means that higher difficulty will have a higher cooldown. In general, it is recommended to do easy difficulty tasks if you have spare time to remain active and medium or hard difficulty otherwise. 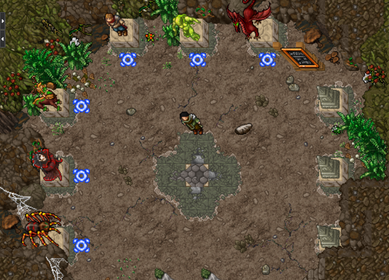 Finishing some tasks will grant you with access to its specific task boss, if it has one. Speaking with the tasker NPC, select boss room and you will be able to see which tasks have a task boss. The first ever task boss available is the Giant Spider one.

Killing one of these bosses grants you with present boxes, that contains several goods such as gold, upgraders and a chance for a few relics if you're lucky.

After hitting level 150, you can proceed to the new zone with stronger monsters, with also a new tasker NPC. Head north from Snip Task Master and enter through the door, which leads you to the new zone. Danny Drinkwater will be the tasker NPC for this area. He also brings a shop that sells Task Boss Charges, that allow you to face and possibly defeat task bosses without needing to complete its task. The currency for these are task points, which you obtain through completing normal tasks.

After a certain point, what's written above just repeats itself, so always keep looking to your next zone level so you can keep progressing!