You can upgrade some of your spells and skills to further aid your progression against powerful beings and daring challenges throughout BlackTalon. The spell improvement system provides you with the possibility to make a spell better by increasing its effects. You can add points into your spell by using spell crystals, which will turn into points that can be spent by using the !spellboost command, as shown in the image below. 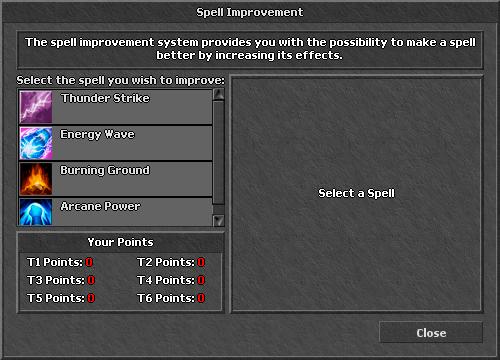 Currently, the spell boost system has three tiers, as each of them has a different spell stone requirement. Therefore, if your spell is still on tier 1 stage, then you will need tier 1 spell crystals and so on. Each spell will have two possible categories to improve, like so in the image above. Each tier has a 100 point cap that you can invest freely however you would like in the categories available in your desired spell, meaning that if you want to get all 100 points in damage you are able to do so or if you want to split them half and half you are also able to do so. Below there is a list with all of the possible spell modifiers.