Unlike normal guild systems where it's just a way to gather players under a group, BlackTalon has special features that makes guilds much more beneficial. 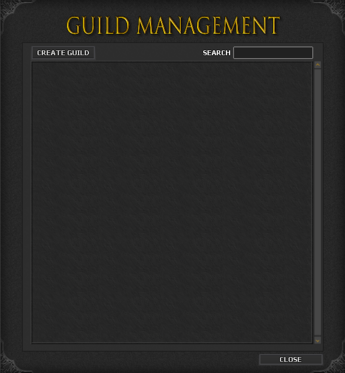 In order to join or create a guild you need to access the in game guild functionality, located at the others menu, at the top of your client. Clicking on the guild tab, opens the guild menu like the image on the right suggests.

In order to create a guild, you just need to click on that button on the top left of the guild menu and choose any name desired. Upon successfully creating a guild, you will be asked to relog in the game in order to the changes to apply. 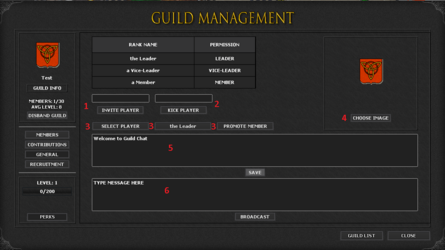 Guild general menu. 1. Type the player name that you want to invite and hit "invite player"; 2. Same for the invite, but to kick a player; 3. These three buttons are used to promote or demote a player. Use the first button to the left to select a player you wish to promote or demote, then the second button to choose the desired rank and the third button to confirm the promotion/demotion; 4. Used to change your guild's emblem; 5. Setup a message that will appear whenever a player opens guild chat; 6. Broadcast a message to all guild members that will appear in red on both your screen and on server log. 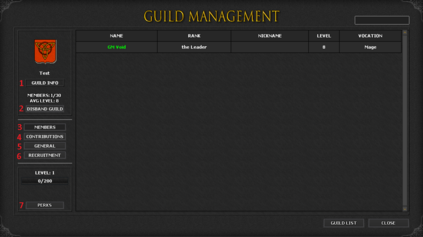 If a player shows interest and applies to join your guild, you can either accept or decline by clicking the Recruitment tab, like shown in the image below. 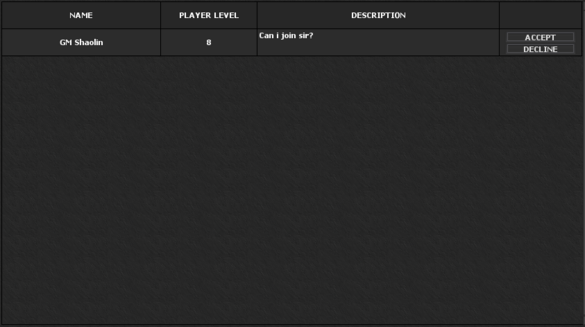 If you have no guild, you can open the guild menu and see many guilds available for you to apply. If you apply, the leaders and vice-leaders will decide whether or not they want you to join and can decline your application without reason. Hit the apply button if you wish to join and write a nice message. Be polite! 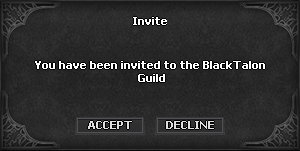 Applying to a guild

If a guild leader or vice-leader wants you to join their guild, they can also invite you directly. When that's done, a message will appear in your screen and in your server log, like this

. In order to accept, open your guild tab and a menu will pop up, like shown in the image to the right.

Guilds can also level up and with that gain several bonuses that helps only those who are part of a guild, if your guild has enough levels, that is. You can earn guild exp by doing daily quests and daily bosses while being in a guild, which will count towards the exp required, located at the guild menu. Perks comes from each level up a guild goes through, and they give bonuses such as: