Similarly to the monster class system, the gear that you drop will also be categorized into different rarities, which matches the monster's class, starting from epic rarity and above. These equipment can be obtained through a monster orb, quests and through crafting. If you obtained a piece of equipment through a monster orb, then it can only be either epic or legendary. Currently, there are 5 equipment rarities available, as listed below:

Upgrading an equipment's rarity can determine the amount of soul scroll slots they can have, which ultimately will vary from equipment to equipment. Another benefit for upgrading the rarity of your equipment is the base attribute increase and might increase, which will increase your character's damage and healing. Another benefit to having higher rarity items is that the higher the rarity, the more lines of attributes an equipment will have. Strange rarity will start up with only 1 line up until mythic, with 5 lines of attributes.

Rarities up to Legendary are obtainable through several means in BlackTalon, such as from quests and orbs. The Mythic rarity is different, since it can only be obtained through the rarity upgrading system upon upgrading a Legendary equipment. We'll elaborate further below how it works.

To get started you firstly need to find the Rarity Upgrader, which is a machine that will allow you to upgrade your equipment. It's located at the NPC's teleport, heading a little to the southwest after entering it. 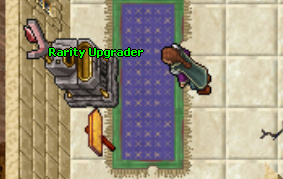 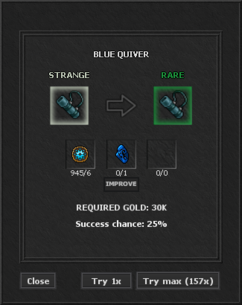 Once found, just right click the machine and drag it onto the equipment piece you wish to upgrade. Doing so, a menu will pop up with the basic information about the process, like shown in the image. Note: You can only upgrade items with at least strange rarity.

As the image suggests, the equipment obtained will require a fee in order to attempt the rarity upgrade. One of the needed materials is called Rarity Token

. This is the main usage of this token and, therefore, is highly sought for. The cost of rarity tokens will vary depending on the equipment's level, having higher requirements the higher equipment level. The other required material is gold

and also works like the rarity token in terms of the costing. You can also see an Enchanted Rune

in the center square. This item is used to improve your chances for upgrading the item's rarity, doubling the base chance.

Since the material cost vary, the upgrade chances does not. So, below we'll organize a table with the set chances for each rarity.

Starting from equipment of level 1200, aside from using rarity tokens and gold, you will also require the usage of Minor Crystalline Tokens

as material as well, which are mainly obtained through special orbs from hunting grounds. The chances for this also changed, which we'll list below: