Soul Scrolls are items that you can slot into your equipment that will grant you with a different variety of bonuses. These do not drop from any monsters, being quite rare depending on its typing. We will further elaborate about soul scrolls below.

The soul scrolls are slottable into any piece of gear that has a slot in it, like shown in the image. The slot will firstly appear as Locked and you will be able to unlock that slot through the usage of soul scroll unlockers, mainly obtained through Hunting Grounds. The availability of a slot in an item varies and usually low level equipment can not have soul scroll slots. For the equipment that can have the slots, upgrading its rarity will increase the slot number by 1. Some equipment need to be of a certain rarity to have its first slot visible, for example the aragorn items, like shown in the image to the right, can only have its first slot visible when it's at epic rarity.

Soul Scrolls have fixed attributes and are tied to the creature that you obtained that scroll, which means that soul scrolls from different monsters are different from one another, but they will have the same bonuses if looted from the same monster.

A soul scroll when you hover your cursor over the scroll (values and monster merely illustrative). 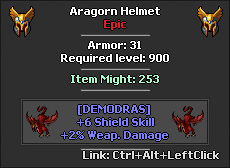 When applied to an equipment you will be able to see its bonuses on the equipment's tooltip, like shown in the image to the right.

Soul scrolls are also divided into different content on which you can obtain them, where you can see where it was originated from through its color. A table below will be organized to better understand this concept. There are currently 6 types of content where you can get yourself a soul scroll. The tooltip color will also change accordingly to the scroll type.