Third Season of Blacktalon is back September 2nd, 2022 (7pm UTC).
As we said previously, every donation point from season 1 and 2 will be given back. But to not inflate the market and make a better balance to the game, the store, blue diamonds and legacy points will be delivered in a schedule as the following:

To proceed with the fusion one must place three of the same relic and tier at the upper slots. In the bottom slots you will place up to three reagents that are used to increase your odds of successfully fusing relics, which will be better elaborated below. Reagents are not mandatory for this process, but bear in mind that the success chances are not so good without them. Once everything is in place, make sure you have enough to cover the gold cost, located at the bottom part of the fusion menu and then hit Fusion to start the process. An animation will play and you will then know if you have succeeded or not. If you fail, there is a chance that some of the materials used in the process will return, including relics.
Tower Arena
The tower arena is divided by floors, the next one being more difficult and more rewarding than the previous one. You can start the tower arena at anytime with no entry cost, however, if you want so, you can use a Tower Ticket that will be consumed in order to improve your rewards.
Bestiary
Bestiary is a system that allows players to have more information about a monster, such as how much experience it gives, how much health it has and its orb loot. You can find the bestiary menu through the Others menu, like shown in the image.

Waypoint System
The waypoints are a quality of life system that allows players to fast travel through different locations throughout BlackTalon. From normal locations, such as creature spawns, to specific places, such as the dungeon lobby, tower arena and daily bosses, players can access key places within the click of your mouse.

Spell Improvement
You can upgrade some of your spells and skills to further aid your progression against powerful beings and daring challenges throughout BlackTalon. The spell improvement system provides you with the possibility to make a spell better by increasing its effects.

Smelter
Smelt a variety of equipments and crystals to get gold, resources or lower tiered crystals

Cast
You can now stream your character or watch what other players are doing via our cast system! Could be a challenging quest or a chill time with some fishing., you decide! Use the command !cast to either look for players who are streaming their gameplay or stream one yourself.

Changelog
Added
Daily Job tasks np (increased experience while doing them)
New world boosts
+100% bestiary kill counts for 1 hour
+100% task kill counts for 1 hour
+40% boss loot rate for 1 hour
Removed
All equipment essences removed from the game
Experience bonus from all source, excluding scrolls and stamina
General Changes/Fixes
Better walking (now you can stack with other players more easily)
Break System changed to "Smelter" (under "Others" menu)
Smelt a variety of equipments and crystals to get gold, resources or lower tiered crystals
Reduced drop chance of secret dungeon key (pits of inferno)
Now the daily bosses charge is only consumed after you defeat the boss (if you die, charge wont be consumed)
Complete rework of Soul Scroll bonuses (removed some 'useless' bonus and improved the scaling)
Increased upgrade rate3 ->4.5
"Achievements" renamed to "Milestones"
Changed the outfit reward from the story line mission to eliminate Arthoix (brotherhood => knight)
All cities will be open so players can buy houses. Spawns will be locked until you have enough level to enter them.
Dark Island task bosses rooms were removed and readded into a new main room, accessible through the NPC.
Skill tree changes:
Completely reworked skill tree
Each vocation will have different nodes and bonuses
Structured with 4 paths (with 2 being vocation exclusive and 2 common to all)
You can only obtain 1 "Big Nodes" from the same path.
Removed points gained from quests and "Milestones"
Relics:
Because of the new fusion system, we reduced the base values of a lot of relics (they will be the same or better at tier 2)
Relic container reduced to 3 slots. You will be able to increase the slots through the game
Milestone:
Bonus balanced
Elite Creatures changed to be global instead of area separated
Hunting Ground will now be separated through areas instead of uniques
Jewelcrafting
Reduced the level requeriment to craft Upgraders: T2: 10 => 1 / T3: 35 => 25 / T4: 75 => 50
Vocation Changes
Spell improvement for level 80 spells (only damage-wise)
Increased Health or Mana gain per level to promoted vocations by 15
Warriors:
Increased damage of "Cyclone" and "Hundred Blade" by 14%~
Bowmans:
Increased "Magic Arrow" ticks by 1
Increased "Arrow Fury" targets by 1
Druids
Increased damage of "Carniphila Attack" and "Eternal Winter" by around 13%
"Nature Regen" base healing 5 =>3 & spell bonus 0.25 =>0.15
Mages
Reduced damage of energy missiles by13
Client Changes
Changed client layout
Improved bot casting speed, it will cast faster now
Option to hide obtained cosmetics at the store

I'm here to announce the launch date of season 3 and some announcements:

Blacktalon season 3 will release on 02-September at 19:00 UTC

Test Server
1. First of all we would like to thanks everyone who helped us at the open beta, we received a lot of feedback and bug reports that we really appreciate. This helped us collect data to improve the server.
2. The Test Server will close on 26th of august
New Season
1. As some of you have noticed in the test server, we had made some significant changes and added new systems, which hopefully will make the gameplay more enjoyable. (The list with all the changes from previous season will be posted a few days before the launch).
2. We learnt about past mistakes and we will not make big changes to core system mid-season unless absolutely necessary.
Donations
1. As announced already, we will be giving back every point donated through season 1 and 2, because problems in previous season we will also be giving back blue diamonds, the points drop scheduled were already announced
2. Starting now, we will have points package that include diverse items such:
- Blue diamonds
- Continental Shards (They can be used in place of fragments to summon continental bosses and each used increase the boss drop chance by 0.07%)
- Worldboost Scroll
- Seasonal Cosmetics: chest that contain seasonal cosmetics
- VIP Chests: Chest with items such as T1/T2 upgraders, spell crystals and even mainland task/quest relic box
3. Preseason Promotion:
- +10% points
- For all package you will receive DOUBLE vip chests and DOUBLE continental shards
- For 100$, 150$, 200$ and 300$ packages you will receive +50% tower tickets
- This will last until the launch time! 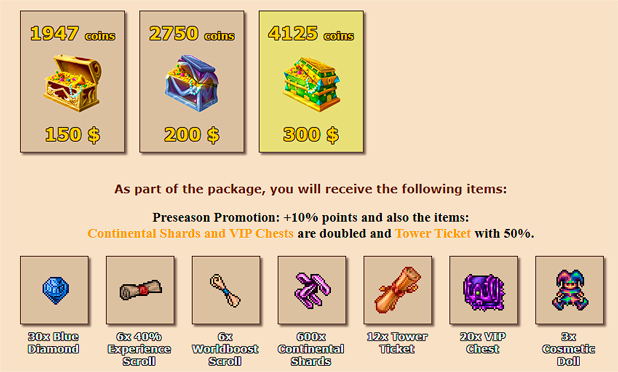 The 3rd season of blacktalon is near. You can already create your character and tomorrow we will start the open test server!! The official launch date is yet to be determined but expect it in 1 to 2 weeks (this depends on how the test server goes).
Due to the unexpected issues of the 2nd season we have decided that you will be given back 100% of the blue diamonds that you acquired through donations at the previous season as according to the following schedule: 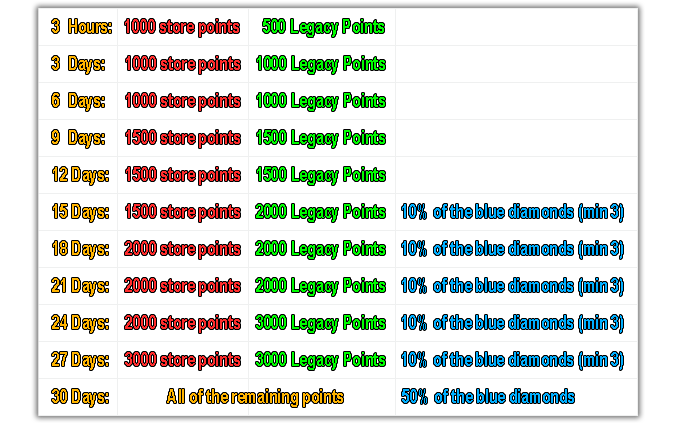 Blacktalon staff is here to remind you all that there is currently 5 days until the server is closed in order to prepare for our next launch. We will shortly start the open beta as well, stay tuned!
We will also, in the near future, elaborate better regarding how premium points and blue diamonds will be returned to you, if you made a direct donation to us.